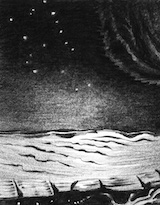 Out in the desert, they wanted to take off their clothes. She didn’t stop at her clothes. She took off her hair, and he began to run.

“Why aren’t you fully formed?” he shouted over his shoulder.

“In every other way I am,” she yelled back, “all my womanly parts are full and complete!” He stopped running and turned round to look. She stopped some distance away, and inspected his manly parts. It was hard to tell how fully formed he might be, because they were limp. He ran off again, towards the shadow of some hills. She followed him, laughing loudly, watching him dangle. He was serious.

“You’ve got… no hair” he shouted, panting.

“I know!” she laughed back, running harder. She caught up and ran past him.

He stopped, bending forward, resting his hands on his thighs, thinking the chase over, but she ran on towards the rocks that had broken free from the hills with the heat, cold, heat, cold of the desert day and night. He called out “Wait!” but she didn’t. She crouched down, running out of sight among the huge boulders until she found a good spot. She could hear him shouting:

“Hey! Hey! Where are you?” She put up her head and he spotted it, same colour as the desert stones but shiny, reflecting the low sun. He ran faster and his heart began to beat aggressively hard, so hard he could hear it inside his ears, thumping out of rhythm with his feet on the hard-packed sand. When she heard his footsteps she crept around the side of the boulder and stood before him, smiling. He reached out to touch her head, stroking the base of her skull.

“I like it,” he said “I like it,” and in the creeping twilight a helicopter searchlight jerked over the sand and they both pretended not to notice.