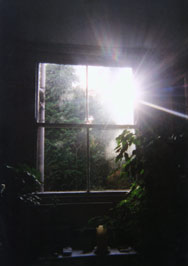 The inevitable clang of that piece of iron girder he used for keeping the garage door closed—that was to become my timekeeper; my sounder of the hours and—for a long time when I was ill—of the days. I could hear it through two doors and three walls, in the bathroom. For me, it became more resonant than the pips on the radio, even though I knew those serious blips would mark every hour faithfully, even when I didn’t care. Besides, I had long since ceased wearing a watch; it irritated me.

Sometimes he would miscalculate (or perhaps it was intentional)—I could tell by the length of the ring as it scraped across the gravel—and it would settle short of the garage door. As if conscious of the sound it made, whatever time he was there (for it was always late or early) he would pause, then push it further until it rang again, dull this time as it rested against the rotting wood. I never knew whether he used his foot or stooped down to move it by hand. I was never by the window to see; besides, only the sound concerned me, although once or twice I had noticed the girder sitting inert at it’s duty when I returned home. Occasionally, outside, there would be other ringings of uncertain origin: they did not reach me. I responded only to the sound of the girder.

So I don’t know whether he kicked it or pushed it with his hand this morning (perhaps he kicked it—surely it would be too heavy to push by hand?). Anyway, now I’m awake. As awake as if the cock had crowed on my bedhead, just for me. Today, the metallic ring is the sound of the sun, gently bracing me against the day. Now I have an hour before the rest of the street wakes up, and before the stale ebb of normal life washes back over this shining morning. I hardly manage to dress before the dull bell of the garage girder sounds again. It surprises me and, this time, intrudes.

Next day I feel different. I get up early, without the girder, and put on my watch. Although I haven’t been wearing it, I still wind it up every day. In half an hour, it’s sitting easily on my wrist, and I remember that it was a 21st birthday present from my Grandma. The girder sounds while I’m eating breakfast; I pull back my sleeve to check the time: 8.10, girder time. 8.13: girder goes back. This is a good watch, sitting here on my wrist. No battery, just a ticking mechanism. Now I can arrive at work on time, and stop worrying about how to get through the office door undetected. I can walk to my seat and sit down, as if I’d just been to the toilet. Nothing has ever been said, but I know that eyes are on me.

8.31: the girder sounds; I'm already late. I've been waiting for it, forgetting to look at my watch. Now the sound grates across me, and across the muddy gravel. It just rained but stopped suddenly. I rush out into the street, hating the girder. He's just pushing it up tight against the door. I speak, polite against my will:

“Morning; alright?” (I hate your stupid girder. Can’t you get something quieter?).

“Alright?” he returns. No-one round here says “hello”. They say “alright” or “right”, as if they care how you are or need to check that everything is as it should be, but no-one ever knows how you really are because you're just supposed to say “alright” back. I never talk to him, other than this obligatory local politeness. He doesn’t know me, how I am, really; and I don’t know him at all.

Now down the hill, into the yard, through the door, looking at my watch.

“Got yourself a watch at last, then?”

“It was a present from my Grandma.”

“I thought she was dead?”

“She is, eight years ago… I never… I stopped wearing…” I sit down, entangled in useless explanation. They already think I’m odd so don’t ask any more questions. I don’t make any effort to change their view.

I work on whatever papers are in front of me. I don’t normally notice the time, but at 12.25, I look at my watch. At 12.30 I go out for lunch: sandwiches in the park. Back at 1.28. At 3.15 a drink: coffee, weak; not much milk. I finish work on some more A4 papers. Always A4 papers, every day. Now it’s 5.17 and I don’t want to start anything new, so I shuffle the papers around on my desk for thirteen minutes. That’s a long time and I’m no good at faking work—the papers make too much noise, so it doesn’t sound like I’m really doing anything. No-one notices anyway because they all have their own avoidance techniques. It’s time to go now: 5.30. Up the hill, through the door, make some tea.

7.04 am: the girder again. Cloudy day; I go back to sleep. It’s not time to get up yet; this small part of the morning always belongs to me so I turn off my attention. By 8.15 I’m up, I’ve had my breakfast and I’m ready for work, but it’s a bit too early, so I sit and wait, picking dried food off the tablecloth and out of the gaps in a place mat. I try to get them all out before I have to leave. The girder sounds. What does he do for a living, that he has to get up before seven and come back at nearly half-past eight? I don’t feel like saying “alright” today, so I hang on to the kitchen table, avoiding him. I have my watch. I can hurry to work and still be on time. His door shuts, then I hear him walking through his house, so I leave.

Yes, I get to work on time. No-one comments and the day goes like yesterday; except that I look at my watch more, telling myself it reminds me of grandma. She’d always complain when I was late visiting her, although she never mentioned the watch. But I still felt guilty; I did think of her, I always told her so, but she really didn’t like it when I was late and sometimes it made the visit feel sour. I walk up the hill, back home, calling in at the shop for some bread. The assistant looks at me. She talks like my Grandma, but with less confidence.

“Intyer ’eard?” She peers past me, over the counter and up the road, as if she can see round the corner.

“Bin a fire on yer street.”

“Dunno, but a reckon it wo’ them garrigis—all the petrol an’ tha’. Shoulda coom dowen years agoo—mindew, th’full of that asbestis, ent thi, so a cant see ’ow…” The voice trails off, embarrassed at appearing too clever by knowing even slightly more than the other people in the shop. In fact, only one of the garages (mine) is made of asbestos, and no-one keeps cars in them any more—they’re too small and cluttered with the sort of things that people put in old garages.

I pay for the bread and run off, my stomach turning with possibilities—I’ve left the gas on, a saucepan has caught fire, the central heating boiler has blown up or something. I once heard a story from someone about her friend, who knew a woman who was always worrying about things like that. She used to ring up the neighbours and get them to check. One day, she didn’t worry; she knew she’d left nothing on, and when she got home the kitchen had burned down and everyone was standing around, looking. People have similar stories to match every ordinary fear. They target the moment you stop being afraid: anything from axemen in the back seat when you pick up your car from the car park, to getting home and finding your house in ashes. So I say to myself that it can’t be my house—I’m worried, so it’s alright.

Here I am at the front door. All the garages have burned down, except mine (made of asbestos) which is just a bit black; and the fire engines, unconcerned with personal reactions, are repacking their equipment. My gaze magnetically joins the others; but most of them start walking off so I go inside, not wanting to appear ghoulish even though I haven’t had a good look yet.

At 10.20pm I hear the girder. Not once, but repeatedly, like a stuck chime. I pull aside the curtain. He begins to search through the wreckage but stops: a torch in one hand, an armful of charred remains weighing down the other. He stands still on the blackened gravel, shoving the girder from foot to foot, his body leaning the opposite way each time to compensate. It looks heavy, really heavy: I can see now that he could never push it by hand. Some of the stuff in his arms falls back to the ground.

Tomorrow, I’ll talk to” I’ll say “alright”, and ask him if everything is alright, and really mean it.