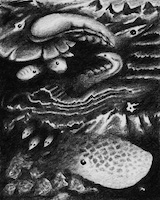 When he discovered she was drinking petrol, he wasn’t surprised. He spotted the bottle in her bag; smelt it. She would take it out, sipping at intervals throughout the day. He knew by the worn label that it had been used regularly, and he could tell it didn’t contain alcohol. When he asked her why she simply shrugged, as if it were not something to make an issue of. But there had to be a reason, so he pressed her further. She could only reply:

“I don’t know. It makes me feel comforted.”

“And you don’t have any ill effects?”

“Only the last three years. I took tiny sips at first, then a little more. I’ve got it about right at the moment, I think. A bottle lasts me a few days.”

She didn’t smoke, so there was no risk there, but he began to feel nervous when she was cooking or sitting near the fire, although she seemed oblivious to the danger.

Why he wasn’t surprised, he couldn’t say. It just seemed natural, somehow, and he told her so.

“It reminds me of something,” she said one day, “something I’ve forgotten. It’s a kind of memory…”

“What? I mean, what do you remember?”

“Well, it’s not a memory of a place, or a time or situation. It’s the memory of an emotion, and I can’t get to it any other way. It reminds me of a feeling I used to have.”

“What kind of feeling?” She paused to take a sip.

“It’s not really a particular emotion, more the sense of a time earlier in my life, as if I remember an atmosphere whole, just as it was for me at that point in the past. But although I know the feeling so well I can’t remember any events, or when it was.” She took another tiny sip, looking up vacantly as if to invite inspiration.

“I can remember it being spring, and seeing buds on the trees, and I can also remember feeling like this. It’s not a specific emotion, just how I felt that day, generally; and on other days I can’t recall.” He watched her, waiting for more information, but she stayed quiet. After a few minutes, she said kindly that wanted to be on her own. He kissed her on the top of her head and left the room, her smile turned inward as he closed the door. She was no longer concerned with remembering; instead she began to follow a thread. The petrol connected her to something profound and yet so nebulous she could barely hold on to it. Even when the feeling evaporated, and she tried to isolate the memory, it remained buried solidly in the background and her thoughts slipped off the impenetrable smoothness of its surface—she couldn’t get inside it, there was no door and she needed the petrol. Then as it went down, burning slightly, she could feel something indescribable as herself, as her most private territory. She took another sip. She didn’t hold it in her mouth, just swallowed it down, avoiding the tongue like the first spirits of youth.

It was getting darker outside. Her stomach was warm, full and complete and she was entirely suffused. There was a completeness about this experience that was so inclusive it made other emotions colourless. She remembered times and places in her past when this completeness had enveloped her, realising with an awesome finality that this was her, that everything else, all the day-to-day, the routines, the changes, the life in which she had so gradually become immersed; all of it became remote and peripheral, transitory. This was no longer a sense of something; she said it quietly—this is me—and she could feel herself becoming smooth, rounded and complete. She sat still for a long time. He was busy in the kitchen. She could hear him, remote and occupied.

She took another sip and, this time, held it in her mouth. The taste suddenly became repulsive. Without hesitation she got up, went outside and tipped the rest over a barren spot in the garden, then threw the bottle away. Sitting back in the chair where there was a patch of sun, her internal presence filled the room and she became heady with exhilaration as she felt herself expanding. Outside, traffic passed and the wind blew leaves from the trees. The kitchen was quiet. She just sat still, in one place until he appeared from the darkness outside, carrying a bottle of petrol.

“I bought this for you,” he said, standing in the shadow behind the door.

“It’s okay, I don’t need it any more.” He was a little hurt and the rejected bottle felt stupid in his hand, but when he saw her smiling he relaxed.

“You’re still smiling, then?” he ventured, expecting an explanation.

“I don’t want to drink petrol any more.”

After standing there with the bottle in his hand for a few minutes more, he went outside and poured the whole lot into the petrol tank of her car.

“That’ll take us past the place we thought we were going,” he said to himself, not understanding what he might have meant. But it sounded right. When he came back inside she held him, just because he was there, and it felt as if she were holding everything in the world, and he happened to be included simply because he was part of the world, just like her.

“I’ve arrived,” she thought to herself, “this is where I was heading and now I’ve arrived.”